The world in an all-encompassing climate emergency, so why does EIA’s Climate Campaign focus primarily on just one small aspect of the crisis?

Hydrofluorocarbons (or HFCs for short) are under-recognised in the climate debate – no-one really talks about them yet they are a huge problem for the climate. They may not be as abundant as carbon dioxide, the main climate culprit, but they have a big warming impact over a very short amount of time and the amount of HFCs being used in the world is growing. 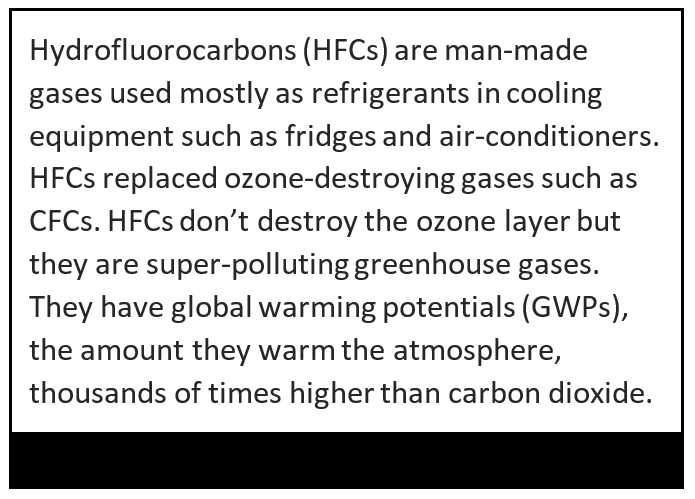 The fact that they are short-lived in the atmosphere (usually less than 20 years) means that if we get rid of them quickly we can avoid a huge chunk of near-term warming – buying us time to avert climate catastrophe and avoid irreversible climate tipping points.

We’ve all probably seen the coronavirus graphic of what ‘flattening the curve’ looks like and most of us seem to understand the science, urgency and necessity of staying home to avoid infection rates spiking and overwhelming health services.

The very same concept can be applied to climate change; we need to flatten the curve to slow warming to avoid climate tipping points – and action on HFCs is one of the biggest opportunities we have to flatten the climate curve in the near-term

Climate tipping points are warming thresholds which, once crossed, can create irreversible and potentially catastrophic changes to vital ecosystems.

The Intergovernmental Panel on Climate Change (IPCC) first introduced the notion of tipping points two decades ago but questions remain as to what the tipping points themselves are, when they might be tipped and what exactly will happen when each is reached and passed.

There is uncertainty surrounding the specific degree of warming relating to each tipping point threshold, but it is agreed that reaching these thresholds would be catastrophic.

Reaching tipping points could result in the belching out of staggering amounts (potentially hundreds of billions of carbon tonnes) of methane from melting permafrost, which would very quickly raise global temperatures and set us on a much faster trajectory to complete climate breakdown.

It could also lead to extreme melting of ice sheets, which would raise the sea levels enough to inundate coastal cities around the world (such as New York, Bangkok, Shanghai, Dhaka and Miami).

Tipping points could permanently change weather patterns and ocean currents affecting crops, climates and livelihoods. Or they could mean the loss of our Amazon and boreal forests, irreplaceable ecosystems upon which humans and the entirety of the planet rely.

These tipping points will occur at different temperature thresholds. We don’t know for certain what these thresholds are, but we know they must be avoided and every tenth of a degree counts.

A mere half-a-degree (0.5°C) of warming may not seem like a lot but in terms of the climate it is huge. It is the difference between losing 80 per cent of the coral reefs (at 1.5°C of warming) and losing all of them (at 2°C). It is the difference between the Greenland Ice Sheet taking 10,000 years to melt (1.5°C) and taking as little as 1,000 years to completely disappear (2°C), with sea levels rising up to 7m. Half a degree of warming is also how much could be avoided under the Kigali Amendment, the international agreement to phase down HFCs.

Quick action on HFCs will have quick results for the planet. Many climate action pledges focus on reaching net zero by 2050, but in reality the fight against climate change could be lost before then. We need fast action on short-lived climate pollutants (SLCPs), HFCs, methane and black carbon. We need to slow warming as quickly as possible to avoid tipping points and runaway climate change. Acting now on HFCs would produce climate results in the short term and is essential to keeping warming below 1.5°C.

Just as every tenth of a degree counts, every year of inaction brings us closer to these tipping points. International agreements such as the Kigali Amendment and regional legislation such as the EU F-Gas Regulation need to be sped up. We need to phase down HFCs faster and more sustainably. Furthermore, some major HFC manufacturing and consuming countries such as the USA and China have not yet ratified the Kigali Amendment.

With every year that passes, more and more equipment filled with polluting HFCs is installed around the world. These types of equipment typically have lifetimes of 15 to 30 years, all the while leaking dangerous HFCs into the atmosphere before emitting the remainder of the gases when it’s finally disposed of. The move away from HFCs can be speeded up because alternatives already exist in the market for almost all types of HFC-using equipment. These alternatives are more energy efficient and are becoming cheaper and more widely accepted.

Natural refrigerants have been used for cooling equipment for hundreds of years and are now making a comeback. They do not destroy the ozone layer and have zero or very low GWPs so their climate impact is minimal. However, not everyone is installing natural refrigerants because they are not as widely available, there are additional safety requirements, more training is required to handle them and out-of-date product standards prevent their uptake. All of these barriers can be reduced with better policy support and end-user awareness.

Switching to refrigerants that don’t destroy our planet is just the first step in cleaning up the cooling industry. We need to drastically rethink how we can keep everyone cool in our warming world without dire environmental impacts.

The demand for cooling is skyrocketing – it is estimated that 10 air-conditioners will be sold every single second for the next 30 years!. That’s a lot of refrigerants but also a lot of electricity being used by that equipment.

We are in a vicious cycle of rising emissions which raise global temperatures, meaning we deploy cooling equipment to keep cool, which in turn emits more carbon dioxide that increases temperatures. We need to break this cycle and learn how to cool sustainably.

What you can do

Examine how you use cooling – what refrigerant is in your fridge and your air-conditioning unit or heat pump?

Switch off your air-con and instead turn on a fan, open a window for a breeze, close your curtains during the day, wear loose clothing, wet cloths with cold water and put them on your forehead/neck, put your pillowcases in the freezer during the day, etc.

If you must use air-conditioning, set the temperature appropriately – ideally no more than 24°C. Only have it on in rooms that are occupied.

And choose the best products when you buy – ask installers and retailers for equipment using natural refrigerants, look for the highest energy efficiency rating – check out our Cool Technologies website for options. Make sure you’re getting your cooling equipment serviced as often as it needs to keep efficiency high and to avoid leakage.

Finally, talk to friends, family and contacts on social media to raise awareness of the issue:

From Recovery to COP26: The Contribution of Sustainable Cooling

As part of the London Climate Action Week: Digital, the UK Government and the Cool Coalitionare glad to invite you to a high-level dialogue on the role of sustainable cooling ...
07/02/2020

The day is observed worldwide to raise the profile of refrigeration and air conditioning. 30% of the world's population is currently exposed to life-threatening temperatures. Dubai, UAE, 26 June 2020: The ...
06/29/2020

Why optimized cold-chains could save a billion COVID vaccines

Most vaccines must be kept at a narrow temperature range between two and eight degrees centigrade in order to remain effective.  The COVID-19 vaccine, when it comes, is likely to ...
We Will: Efficient, Climate-Friendly Cooling for All
Receive latest stories, news on efficient, climate-friendly cooling and join the movement!
Sign-up for email updates
X